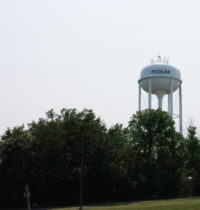 City of Peculiar: Obtaining A Less Expensive Water Source For The Future

Conveniently located 25 miles south of the hustle and bustle of Kansas City, Missouri, sits the city of Peculiar. Founded in 1868 and celebrating its sesquicentennial (150 years) in June 2018, Peculiar was incorporated in 1953 to become a fourth class city governed by a mayor and board of aldermen. Bolstered by visionary leadership and a proactive operations and maintenance staff, the City recently completed two engineering water studies to determine its water demand for the next 25 years and beyond.

Reducing and controlling water supply costs has been a long-term goal of the city of Peculiar from the start of this endeavor in 2013. Could elimination of an intermediate supplier through a direct connection to Kansas City for potable water, justify the capital costs? Will reduced unit water costs provide a return on investment? The feasibility of this project was of great interest to the City’s elected officials because water rates are a frequent topic among residents. Peculiar is hardly alone as other similar communities grapple with this same issue.

1. Creatively use municipal resources to produce measurable benefits for the City.

Throughout the design process, the City looked at ways to incorporate new technologies to facilitate improved service to water customers. This led to the incorporation of a multiple conduit system within the water transmission main construction. The conduit system is the City’s first step in implementing a smart metering system. Eventually the system will allow residents to view their water usage in a variety of ways.

2. Minimize the impact to the community.

To reduce the construction disturbance to the community and its residents, the pipe line was bored in lieu of open-trench cut and installation at many locations along the transmission main alignment. This saved numerous trees and landscaping items. (See photo of pipe bore under tree.)

3. Incorporate environmental preservation into the design and construction.

To minimize environmental construction disturbance, the pipe line was bored and pipe pulled in lieu of open-trench cut and installation at all stream crossings along the transmission main alignment.

The city of Peculiar agreed to disconnect from Public Water Supply District No. 2 and connect to Kansas City, Missouri, Water Services Department (KCMO WSD) directly by Oct. 26, 2017. The project was complete days ahead of schedule.

Larkin Lamp Rynearson investigated potential water supply sources as part of a grant received from the Missouri Department of Natural Resources, and as part of a capital improvement plan (CIP). Three potential water suppliers were analyzed in addition to the current water source. The engineering report analysis reported on each entity’s water source, treatment, construction issues, estimated costs and maintenance of a proposed connection. These considerations were input into a supplier decision matrix to assist the City in deciding upon a future water supplier. After selecting the most advantageous water supply source, a cost analysis was performed to determine if changing water suppliers would indeed save the City money in the future.

The transmission main analysis was broken into three segments and the route analysis investigated alignment options within each segment. Using the route analysis allowed the city officials to make informed decisions on future water supply that could be easily explained to their constituents. After negotiating the direct supply contract with the Kansas City, Missouri, Water Services Department (KCMO WSD) of up to 1 million gallons per day (MGD), the City authorized design and easement acquisition.

The water transmission main project consisted of installation of 470 linear feet of 12-inch ductile iron pipe and the installation of 27,000 linear feet of a 12-inch polyvinyl chloride (PVC) pipe with all associated valves, hydrants and other appurtenances. The project had one Missouri highway to cross (twice), 26 private driveway crossings, and three stream crossings.

The water supplier (KCMO WSD) required a new master meter and telemetry to monitor flow from the provider into the City’s distribution system. The city of Peculiar paid a Kansas City connection fee of $820,000. This was included in the total cost of the project.

Construction of the water transmission main project by Leath & Sons of Raytown, Missouri, began the first week of June 2017, and the city of Peculiar was receiving water from KCMO WSD on Oct. 16, 2017, 10 days ahead of schedule.

This exciting water transmission main project will meet the anticipated regional growth for the Peculiar community. The new water supply increased the former water supply by nearly 50 percent from 700,000 gallons from Public Water Supply District (PWSD) No. 2 to 1 MGD; and addresses the potential water needs of the new I-49 & Peculiar Way Interchange near and around northwest Peculiar to be served by PWSD No. 2 with 700,000 gallons/day. The direct connection of the water transmission main is the critical first step in opening up this I-49 & Peculiar Way Interchange for development. The new transmission main delivered a long-term practical solution within budget and on-time.

With access and availability from several water sources, this valuable resource will entice future generations of commercial and residential developers.

Check out more of our cost saving projects.